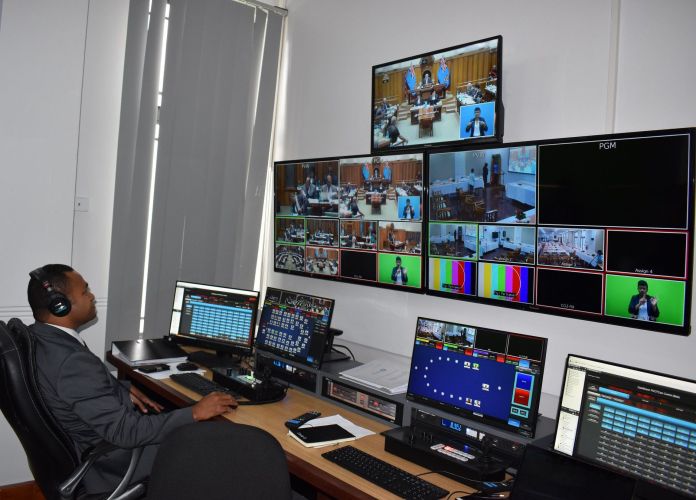 The Parliament of the Republic of Fiji is committed to an ongoing process of improvement in how it communicates and engages with the public. Broadcasting of Parliament’s work is seen as one of the more effective methods of increasing transparency and public awareness of how the government works. To this end, beginning in 2018 the Parliament of the Republic of Fiji undertook a project to upgrade and greatly expand their broadcasting facilities.

Gencom technology was awarded the contract to supply, install and maintain the new systems after a lengthy tender and due diligence process, which included a visit to see the broadcasting facilities at New Zealand’s Parliament. Gencom originally built these facilities in 2007, and after supporting and expanding the system over the years completed a complete refit earlier in 2018. The Parliament delegation also visited several state parliaments in Australia, where the Ross Video Lightning Control System (LCS) has also been used.

Ross Video is a key partner for Gencom, and their LCS meeting control system is the market leader for legislative assembly application. With a Carbonite vision mixer, PivotCam PTZ cameras, XPression graphics, and Dashboard production automation behind the scenes, LCS provides an easy-to-use but extremely powerful solution that streamlines and automates parliamentary sessions. The touch screen interface allows an operator to set up camera angles and graphics for any Member of Parliament, simply by tapping their icon on the map of the debating chamber floor.

For Fiji Parliament, a primary goal was to expand the coverage from the debating chamber to include two committee rooms. In order to provide maximum flexibility and a degree of redundancy, Gencom built two identical control rooms, either of which can be easily switched to control any of the three spaces. According to Gencom Director Keith Bremner, “…This was another of those really interesting and challenging projects for us, which I chose to take on directly to manage and lead the design through to completion. We have built a few Parliament TV systems over the years, and I find every one of them technically complex in different ways. Each has unique needs, with wide-ranging existing technologies and ways of operating them. This one was no exception, but working with the excellent team within Parliament, and leveraging Ross Video’s products designed for this type of application, made things much easier.”

According to Parliament ICT Project Manager Maika Lakeba, “Gencom was great to work with on this project. From the start they paid close attention to our requirements and worked with us to make sure the solution reflected our needs. They fulfill their promises by honoring the contract and were able to deliver to additional requests. We were able to visit their facility in Auckland where they had set up all of the new equipment for pre-commissioning and training before everything was shipped to Suva, which made the whole process more efficient and the final installation in Parliament House went very smoothly.”

When COVID struck in 2020, shortly after the new facility went live, Parliament suddenly faced a new challenge – bringing in Members of Parliament remotely using videoconferencing software and integrating them with the parliamentary broadcast. Again Gencom tendered for and won a contract to provide consultancy services and equipment to enable Parliament to quickly get up and running in this new configuration, and also to provide a lasting remote contribution capability that will enable additional flexibility and efficiency on an ongoing basis.

Bremner adds, “This new requirement was a real exercise in innovation. It’s one thing to have to quickly get video conferencing running on broadcast television, but to get this running in a hybrid sense of both the normal debating chamber camera/audio coverage as well as video conferenced members, was a new challenge. It was something of a science project in that we had to add the hybrid coverage mode into the existing new system, one that was never intended to use VC. And, this hybid coverage mode had to work not just for the debating chamber but also the committee rooms.

“We had to carefully re-design and recode parts of the system, with particular attention to the audio PA system and audio return feeds ensuring that each member could converse whether they were in the chamber or working from home. Luckily as most systems these days are fully reconfigurable and remotely accessible via VPN, we were able to achieve something that would have been impossible a few years ago.”

Within days of a contract being signed, Gencom had shipped a “care package” consisting of loaner gear to get Parliament up and running right away. Gencom engineers, working remotely, were able to talk Parliament operators through the setup and operation of the new tools. Meanwhile, a detailed design was developed and additional equipment ordered to support a more permanent installation. Some of this has already been put to use, and as soon as travel between New Zealand and Fiji resumes a team from Gencom will travel to site to do a full commissioning in the system’s final configuration.