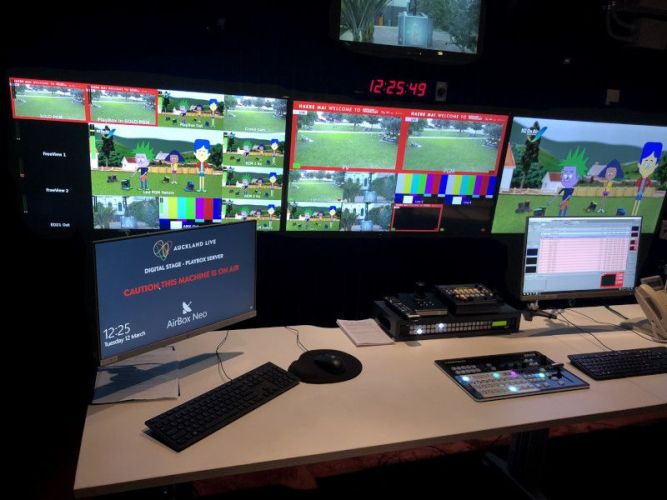 Auckland Live bring live arts events, concerts, and performances to a number of prominent venues across Auckland. When a plan was confirmed to install a large, outdoor LED super-screen in the Aotea Square, Auckla nd Live invited Gencom to help with the design and installation of its video delivery system & production control room, and the supply of much of the technical equipment.

The challenge was designing a system which had reliability and resilience, allowing full flexibility of production control for both live & scheduled content playout, while keeping the total cost within a conservative budget. Gencom’s experience working with a broad spread of broadcast-quality brands meant the right products were able to be identified, and working closely with Auckland Live’s talented technicians throughout, ultimately commissioned and installed. This technology included a Ross Video vision-mixer, Ultrix router and Opengear processing, Playbox Channel-in-a-Box for scheduling and playout, Junger loudness processing, Masterclock wall clock, and a Panasonic Croud Camera. In terms of remote production, it is possible for the technical director to locate them self in either the Civic, Aotea or ASB Theatres, and cut a show filmed in any of these locations with only one frame delay, despite the live video and audio signals routing to the Aotea Centre’s main control room for processing and back again.

The super-screen is now operational and is screening documentaries, visual-arts, film and cinema to the public free of charge. If venues such as the Town Hall or Civic Centre reach capacity when a show is on, the new super-screen can become a ‘spill-over’ screen, and broadcast the performance to a larger audience watching from the grass outside.